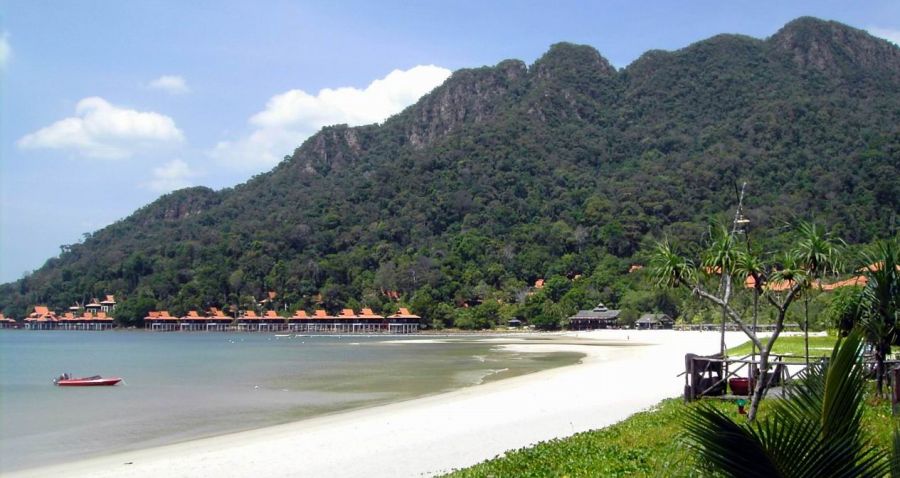 The only way to get here is by taxi which can set you back RM20-RM30 each way. If you intend to circle the island of Langkawi itself, it is more cost-saving to rent a car that goes for anywhere between RM80 to RM150 per day, depending on the car model as well as the seasonal rates.

DESCRIPTION:
Burau Bay or Teluk Burau is a fairly secluded beach in Langkawi. While Burau Bay is regarded as a public beach, the crowd mostly consists of the patrons coming from  either Mutiara Burau Bay Resort or Berjaya Langkawi Beach & Spa Resort. These resorts flank on the opposite ends of Burau Bay.

The beach itself is very long. I estimate that it might take a 2-km walk from one end to the other. The water can be considered pleasant enough to swim in and not as murky as most other beaches in Langkawi. In fact, certain sections of the beach boast a fairly crystal-clear water which is considered a rare offering in the island of Langkawi.

The view from the beach is spectacular, with the jagged peaks of the Gunung Mat Chinchang nearby creates an awe-inspiring backdrop. A hive of water-based activities is normally conducted along the beach, mainly organised by the two resorts on Burau Bay. A number of beach chairs and umbrellas are provided on both ends of Burau Bay which are great for avid sun-worshippers.

Burau Bay is also a great location to view the sunset as well as the sunrise. It is probably one of the few beaches in Malaysia that geographically faces both the east and the west, albeit partially.  During my visit, the sunset was simply breathtaking. A combination of dark blue, pink, and purple dotted the horizon, making a memorable sunset watching experience.