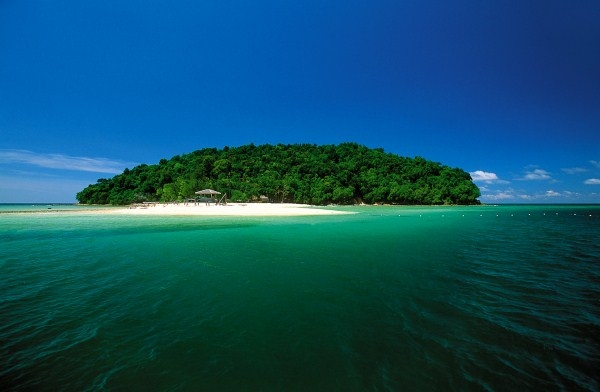 LOCATION:
On the western end of Pulau Sulug, which is the southernmost island in the Tunku Abdul Rahman Marine Park. Access by boat from Jesselton Point jetty (formerly known as Sabah Port Authority) in downtown Kota Kinabalu is about 20 minutes.

Note that for divers using the jetty at Jesselton Point, there will be RM6 terminal fee charged by the port authority for the round trip journey. Also, Sabah Marine Park recently imposed a diving fee of RM20 per day for local divers or RM50 for foreigners.

This dive site is also known as Suman Reef on some dive maps.

DESCRIPTION:
The dive goes down up to a maximum of 20 metres on the western side of Pulau Sulug. I noticed that the entry point had plenty of garbage on the water surface, in the form of plastic bottles, food containers, wood splinters, etc. I do hope the marine park authority to do something about this because the first impression of this dive entry point was not really a good one.

The visibility was quite average or slightly poor. I estimated the visibility to be around 5-10 metres which was probably not that bad. The main attraction in this dive site was probably the great variety of sea fans that grow along the reef edges at some 15 metres deep. Among the sea fan varieties that I saw were purple-blue Euplexaura sp. (more commonly to be seen in dark red colour with white polyps), light-yellow Anella mollis, multi-coloured Echinomuricea sp. of white, dark-brown, blue and green, etc.

The variety of star feathers was not bad too. You can easily spot different varieties of dazzling colours at this dive site. Among the feather of star varieties that I saw were of Cenometra bella (aptly named “pretty” feather star), Bennett’s feather of star (Oxycomanthus bennetti, occasionally seen taking up the prime nutrient flow spot on reef sponges), variable bushy feather star (Comanthina schlegelii, growing on the side of a barrel sponge), and striking blood-red Anderson’s feather of star (Pontiometra andersoni, hiding in between hard corals and sponges). This site also features a number of large petrosiidae barrel sponges (Xestospongia testudinaria) which were a good breeding ground for other living organism. The selection of soft corals and hard corals was not that bad either although it was quite ordinary for experienced divers. There were also a few sea anemones with omnipresent false clown anemonefish (Amphiprion ocellaris). Also, during this dive, I started to take notice of tube sponges of Kallypilidion fascigera (pale blue in colour, one straw is one individual unit but often grows together in a colony). A dive guide book that I read did mention how tube sponges are often being ignored by divers despite having their own photographic charm.

When it comes to fish variety, this dive site scored pretty badly. Apart from a dramatic movement by a large school of gold-band fusilier (Caesio caerulaurea), a rare trumpetfish (Aulostomus chinensis), and a gobyfish. Other peculiar marine objects that you can find here include pale brownish-green star fish (Linckia laevigata, mostly found in pale blue colour) and variegated sea cucumber (Stichopus variegatus, often seen excreting its waste products on the sandy bottom).

The last but not least, there were a host of nudibranch species at this dive site. Again, a new item of interest for yours truly because I was not being particular with these sea slugs before. Anyway, I spotted (and took photographs of, albeit, not satisfactorily) magnificent nudibranch (Chromodoris magnifica, probably the most striking of all sea slugs) and the more common Phyllidiella lizae nudibranch.

Overall, the dive was acceptable but nothing spectacular.